Fabric weaving using shuttles/orthogonal looms is the oldest and most popular method in the textile industry. The first warp weighted loom dates back to 4.000 b.C., and was further developed in the Middle Ages, followed by subsequent improvements to its technology over the centuries. 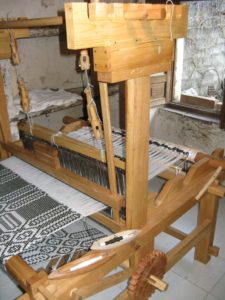 The invention of the steam engine in mid 1700 made it possible to increase the productivity of looms and other machines used to make fabrics. 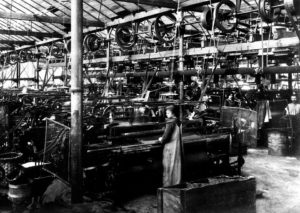 With the advent of electricity and electronics, technology evolved in leaps and bounds with incredible results. 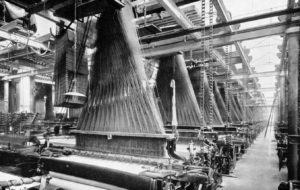 In 2011, during ITMA the top international trade fair for the textile machinery industry held in Barcelona in Spain, looms were on display capable of reaching 1.800 picks/minute… 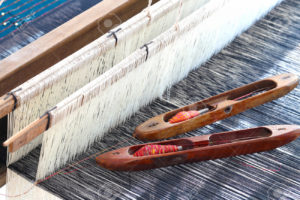 Weaving is the art of constructing a fabric whereas the loom is a machine with parts capable of weaving together the weft and the warp, used to turn yarns into fabrics.

Orthogonal or shuttle weaving uses two or more systems of threads crossing over one another perpendicularly: the warp threads (the vertical ones) and the weft threads (the horizontal ones).

The term “weave” also indicates how the weft and warp threads are linked together.

The first element to decide is how the fabric should be constructed, i.e. the type of yarn and the yarn count, the exact number of the threads per centimetre/inch for the warp and weft, the width and type of weave of the item to be made.

Warping is the first step in industrial weaving, when the cones of yarn are loaded onto the “REEL”. 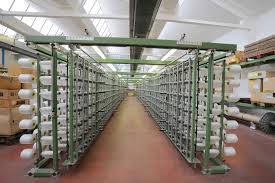 They are joined together by a special cylinder called a 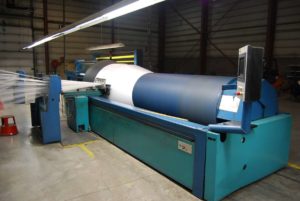 followed by the preparation of the 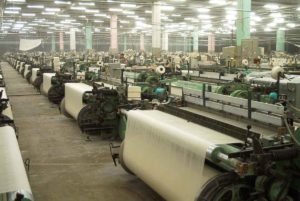 i.e. the part of the loom where all the yarn needed for the warp is wound, that has already been prepared with the number of threads per centimetre/inch, which is then loaded onto the back of the loom.

The beam threads are brought to the front and for simple weaves and small geometrical patterns, are threaded into “HEDDLES”, a system of bars that make up the 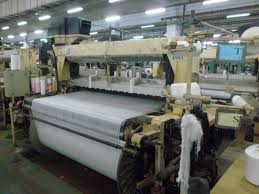 and alternately lift and lower the sections of threads, controlled by a cam motor, in the specific sequence for the type of weave chosen.

This motion creates a space called the 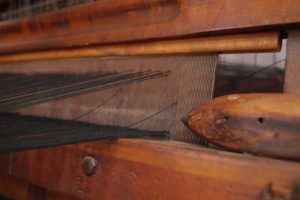 for the weft thread to pass through. After it has reached the far side, it is pressed against the previous weft threads by the “REED”, forming the fabric which is then wound onto the front cylinder on the loom.

invented an ingenious machine: once each individual thread was threaded into a special 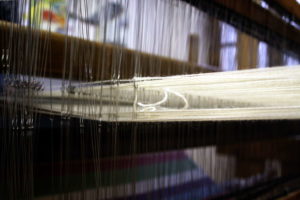 it lifts all the warp threads individually, making it possible to design much larger and more intricate patterns and weaves. 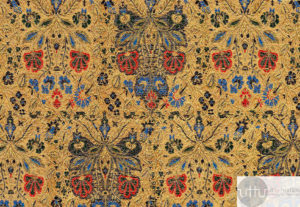 After deciding the arrangement of the opening of the warp sheds, the weft thread is passed from one side to another.

Even if the weft thread is still passed through by hand in some countries, the oldest mechanical system invented by man in 1950 is the 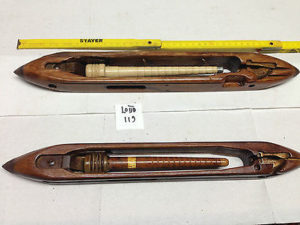 This is a pointed wooden container that holds the “SPOOL” of yarn; it is pushed by a beater, passing from one (SELVEDGE) to the other side of the loom, depositing the thread in the “shed” which is then pressed down by the reed.

In recent years, other methods have been developed to perfect the passing through of the weft, using:

“DOUBLE” rapiers – In this case, the first rapier hooks onto the weft and transfers it to the second rapier at mid loom so it can be taken to the far side

However, only shuttles and rapiers are capable of working with any type of yarn, as the other systems have intrinsic technical limits so that only certain types of blend of yarn can be used.

If you use a DOBBY loom, you can only produce geometrical weaves. The most common of these are:

If you use a JACQUARD loom, there are basically no limits to the possible weaves, that can make up patterns, words, large geometrical designs, or several different weaves at the same time.